The blood red moon rose over the hills and the group looked down on the town of Arlsfort. There were walls extending from a gatehouse, but they stopped before they reached the river to the east and in the west they just stopped at a small watch-tower. 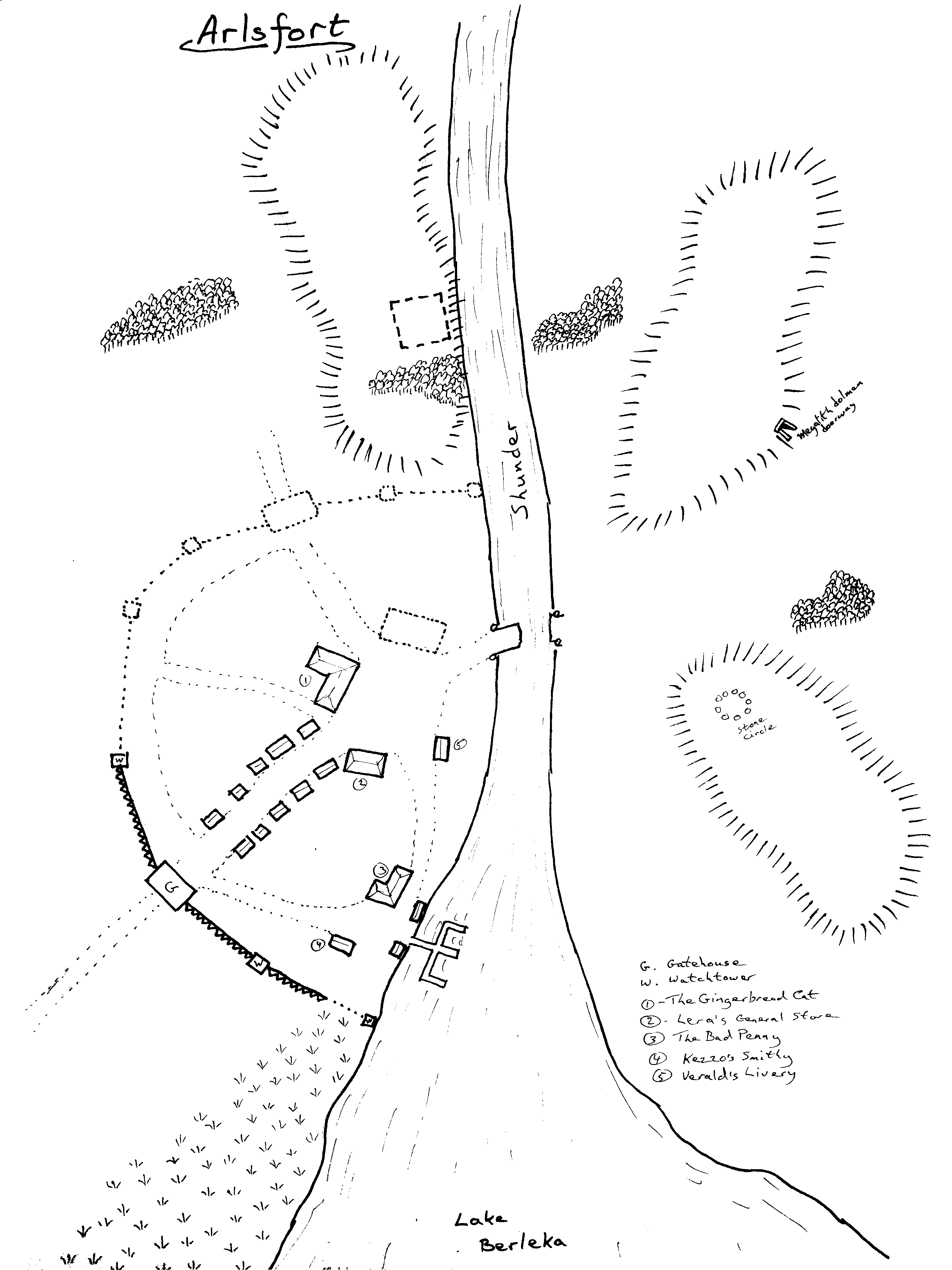 From there on there were markings on the ground showing where the walls would be once they were built. The gatehouse itself looked reasonably complete, but only one half of the gate had been completed. An excellently crafted study gate, but without a companion it did not block the road into town. There were about twelve or fifteen buildings which made up the town. One large inn, The Gingerbread Cat, and a smaller one down near the dock called The Bad Penny. There was a general store, a livery and a blacksmith’s workshop. Add to this and a dozen small houses in a varying degree of completion and you got the impression that Arlsfort was more of a concept than an actual town. Beyond the town a half finished bridge jutted out over the river Shunder.

Pulling the blankets more tightly over the bodies in the cart the group headed for the main gate. The prisoners in the barrel must have heard them talking about the town and they started to make noise. Issac opened the lid and persuaded them otherwise; they might wake again in a few hours.

They steered the cart through the gate and down main street. An impressive looking man approached them.
“Ah”, he said, “the heroes from Red Mills! I’m so glad you could come”, said Baron Feldar.
“Yes, we thought we could build a theatre and attract more people to the town.”
“Oh, perfect! Take a note of that!”, he added over his shoulder to a harried looking clerk. “What sort of a theatre?
“We were thinking of making it in the shape of a duck” and Igorok slipped the wooden duck from under his cloak to demonstrate, much to the alarm of the others.
“Oh my! How wonderful!”
“And it would float. A floating amphitheatre in the shape of a duck!”
“Splendid! I’ll build it if you do some small jobs for me!” and turning to the clerk he added, “Give this priority over everything else! This is key to our future!”
The clerk rolled his eyes as he unrolled his measuring tape and noted the proportions of Igorok’s duck which then quickly disappeared to a chorus of “What duck? What are you talking about?”
There was an awkward duckless red moonlit pause.
“Err, we should get some rooms for the night”, they said.
“Yes, may I recommend The Gingerbread Cat” said the baron.

The group went into The Gingerbread Cat and whereas it seemed like it would be a nice place when it was finished the view of the moon and the stars through the roof did not sit well with any of them apart from Issac. They moved on to The Bad Penny. When they opened the door the noise of the crowd and the smells of alcohol free beer and plain cooking hit their nostrils. Tinus and Bobo jumped on stage and played some merry tunes and Jana Jeve, the landlady, offered the two of them room and board. When they asked about the rest, she narrowed her eyes as if suddenly recognising them and tapped on the counter-top.
Tum-te-tum te-tum.
The group froze, she was Kalla, they were just about to plead for their lives when she added, “Special rates for members, one gold for room and board for all of you for the night.” Sighing they accepted and went back out to look after their cart and its contents.

They debated for a while as to what to do but eventually agreed that they should at least dump the bodies which were starting to smell in the summer heat. So they took the donkey and cart north out of town towards the small woods on the hill above the river. Issac, Igorok and Varis were in the cart, Tinus and Bobo were somewhat behind and a barrel with Rashi’s legs sticking out of it came along behind.

Once in the woods they took the live prisoners, Corporal Larshall Miner and Private Elsienora Rolate, from the barrel and began to interrogate them.
“What have you done to the moon?”
“That wasn’t us.”
“Maybe not you, but it was your cult!”
“No, no, honestly no”.
“How many of you are there in Red Mills?”
“About twenty.”

They were debating what to do with them when Varis spied a campfire through the trees further up the hill. They stuffed the prisoners back in the barrel and crept forward and saw that in the ruins of the original Arlsfort there was a large campfire with three Blood Moon orcs sitting around it. There was also a smaller fire, probably for cooking further back. Tinus, Bobo and Rashi joined the others and they all crept up to the low walls of the ruined fort. They noticed that the orcs were very still and didn’t seem to be moving at all. Then they realised that they were dummies made of old cloth stuffed with straw.

There was however movement near the smaller fire and Issac stole forward behind the wall to get a closer look. He could just make out one large female orc cooking at the fire and bringing food to smaller figures behind her. Then he heard a child’s voice say in orcish. “Why do the hoomans want to kills us?”
“Because we have come into what they think are their lands” said the she-orc in a gentle voice.
“Will they kills us? I’m frightened of them.”
“No, they’d have to find us first and our warriors will find a new place for us to live.”
“Away from Them?”
“Yes away from Them and the hoomans.”

Issac stepped out from behind the wall and walking forward he dumped his weapons and held up his empty hands.
“We come in peace”, he said.
The orc children started screaming in fear. Their ancient grandparents tried to quiet them as the only adult stepped forward to protect them all from the murdering invaders.
“No, no, we come in peace”, Issac insisted, “see, no weapons!” Then turning towards the others he repeated what he had heard and added “Show yourselves. Slowly.”
The rest of the group emerged from the shadows.
“Are we the bad guys?” whispered Varis.

“I am Issac” said Issac, “my orc name is B’Fai”.
“I am Hazzog” said the she-orc.
“Here have this food” said Issac, handing over a haunch of meat.
Hazzog took it gratefully and put it on a pan to fry.
The children whimpered in the background, but were encouraged by the smell of frying meat.
“Are you Blood Moon tribe?”
“Yes!”, she said defiantly.
“What have ye done to the moon?” he asked as the others came forward slowly.
“We did not do that” said Hazzog, “that was Them.”
“Why are you attacking hoomans?”
“We need to get away from Them and to do that we need to pass through your lands.”
“What’s going on?” asked the group and Issac translated.
“Okay”, said Bobo, “who exactly are Them?”
“Zekel” replied Hazzog.
“The Dead” translated Issac.

Hazzog explained that the Blood Moon tribe was running from a horde of undead coming down from the north. Some warriors had gone on ahead to try and find a way through the human lands or find place they could defend. Others like her were trying to move the young and the older members of the tribe. While others had stayed behind with the leader Shalzal, to try to slow the undead, but they were all gone now.

Everyone was just beginning to relax when one of the children complained of the cold.
“Sshhh” said Hazzog and stared in horror at her breath as it turned to fog in the summer evening. It was suddenly cold.
“They’re coming!” she hissed and from out of the shadows stepped skeletal figures, dressed in tattered clothes and armour, brandishing short swords. There were at least a dozen of them.

The group sprang into action and Hazzog unwrapped a very shiny sword from some old cloth by the fire. During the fight Varis was badly wounded but everyone gave a good account of themselves. The group gathered around the orc children to protect them and they slowly overcame the large number of skeletons. Then just as suddenly as the skeletons had started, they stopped coming.

Relieved the group caught their breath. They looked out over the crumbling wall and by the eerie red light they saw hundreds more skeletons moving in their direction.
“Run!” they said and fled into the trees.
They soon reached the cart and the prisoners. They dumped them on the ground and moved on through the trees.
“We have to get to town and warn the people!” they agreed.
“But we can’t go into a hooman place” said Hazzog “and the Zekel will catch us, we are slow with the children and the old ones.”
“Take the cart!” they said and helped the children and older orcs onto their small wagon.
“Goodbye B’Fai and thank you!” said Hazzog and drove the cart at speed to the west.

The group ran on into the town. With the walls incomplete there was no way that the town could be defended. It had to be evacuated or everyone would die. They ran into the inns and raised the alarm. But no one would believe them at first, eventually a few went out to check and quickly came running back in alarm. The group then helped everyone onto the three boats that were tied up at the wharf and asked them to warn the other towns; Pelville and Red Mills. The people of Arlsfort sailed out into Lake Berleka to safety.

Running back to the livery our heroes took a horse each and rode through the gatehouse past the incomplete gate. They noticed Baron Feldar was there on the battlements with his ten soldiers. They tried and tried to convince him to leave, but he refused saying he would defend his town to the death. In the end as the hoard of undead drew near they gave up and galloped into the red moonlight all the way to Pelville.

Meeting Baron Feldar and arranging to build the Duck Theatre: 200XP
Getting a room for the night at The Bad Penny: 200XP
Interrogating the prisoners: 300XP
Spotting the campfire and investigating: 300XP
Realizing that the three orcs were guard dummies: 300XP
Befriending Hazzog: 500XP
Protecting the orc children in the fight: 500XP
Destroying 12 Skeletons: 12 x 50 = 600XP
Giving Hazzog the donkey and cart: 500XP
Evacuating the town: 300XP

Next Session is Saturday 18th May