After resting over-night in The Twelve Oaks in Pelville the group reconvened outside where Orten was loading his wagon with supplies for the trip to Arlsfort. The Rev was nowhere to be seen, having said something about building a chapel for his new religion he had departed. But two likely characters seemed eager to join the group; Monarch a dwarven Artificer, who specializes in potions and Thraa a half-orc Sorcerer.

Tinus and Bobo did some “clothes” shopping at Contin’s Costumes opposite The Shell Theatre. Flamingos were involved. Varis got the proprietor to make him a giraffe mask with a long neck. Monarch went down to what was left of Forester’s Alchemy Shoppe and encountered an angry Noeren Forester cleaning the place. She tried to shut the door in his face saying they were closed, but there was no longer a door and certainly no longer any merchandise on view for sale. Monarch bought some empty vials while Thraa had a look around and asked what had happened but Noeren was in no mood to talk and angrily swept the two out. Rashi just calmly relaxed next to a nice barrel. 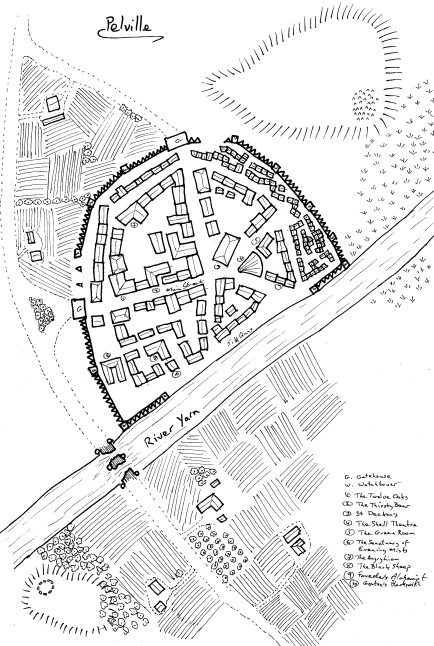 When everyone returned to the wagon they saw a hooded figure waiting for them. As they approached they heard the figure tap out Tum-Te-Tum Te-Tum on the wagon boards. Looking around they spotted more of their Kalla “friends” on the nearby rooftops and loitering across the street.

“Hi Guys”, said the hooded woman, “We see you’re finally heading north to Arlsfort like we asked.”
“Yeah”, replied Bobo enthusiastically.
“Well just be careful up there, it seems to all be one way traffic. Plenty of people have gone up that road since the war ended, but no one has come back down.”
“Oh great” they all agreed.
“Keep an eye out for one of our own while your up there. Jana Jeve, runs the Bad Penny, she went up a few days ago. Oh and we got you some doves as a gift” said the woman, indicating a pair of common wood pigeons in a small cage on the back of Orten’s wagon.
“They’ll carry a message back to us when you find the … errr … items” she added with a whisper and slunk off.

With that the group climbed on Orten’s wagon and they drove north towards Arlfort. On the way they noticed that the countryside was quiet. Too quiet. They almost missed the companionship that getting robbed by the Blood Moon Orcs brought with it.

After an hour or so, they topped a small rise in the road and there ahead of them was the concept of a town they knew as Arlsfort. But it looked a little different. It was totally covered in some form of ivy. Over all the houses and the walls the weed spread out, reaching down the road towards them. The ivy seemed to be concentrated on the Gatehouse and the building them remembered as The Bad Penny. In the road in front of them, lying face up on the weed was the body of an Arlsfort soldier.

Suddenly without bending his knees or using his arms he tilted straight upright.
“Who …. goes … there” he challenged in a broken not very human sounding voice. Looking at him carefully the group spotted ivy growing in under his uniform and even a few leaves poking out of his nose. After that the conversation took a turn for the worse and may have involved a fireball. At one point Monarch was grabbed by the weed and pulled in with ferocious speed, but his friends managed to save him although he did get slightly singed. 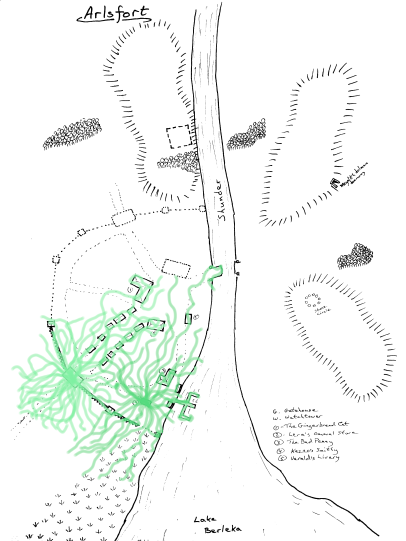 Once the possessed soldier seemed to be pacified the group looked around a bit. Rashi chopped off bits of the ivy and a black viscous sap dripped from it, burning whatever it landed on. Varis took to talking to a nearby tree, the tree was delighted to have someone to talk to especially since it was frightened of the ivy. It didn’t like the ivy. The stuff had been growing here for about seven days. The tree begged them to move it away from the ivy. Monarch was stuffing samples of everything into his vials. Thraa started to blast a path through the weed to the town gate while Tinus and Bobo took to the air.

As they all approached the gatehouse, the dead soldier reanimated by newly grown vines sprang back up and attacked again. He was joined by the vine-animated corpse of Baron Feldar which came out of a trapdoor on the roof of the gatehouse. Again this conversation involved a fireball but in the end the two were destroyed and the vines started to darken and become brittle as if dying.

Suddenly a figure burst from the trapdoor. It looked like a tree-stump with eight waving branches. In the centre of the stump was a large single eye. It was a dangerous foe and just when they thought they had the better of it, it transformed into a mist and proceeded to attempt to poison Tinus in mid-air. Tinus lost his concentration and he and  Bobo both fell to the ground. Varis called the wind and blew the mist back whereupon it turned back to its tree-stump form. They managed to finish it then and when it fell all the ivy that was centered on the Gatehouse died completely. The tree-stump form melted into a black bubbling liquid and started to seep into the ground. Monarch scooped some up in a vial and drank it. He then immediately fell down, dying from a massive poison dose.

Searching the gatehouse, the only interesting thing that Thraa discovered was a large and very heavy wooden box but could not immediately see how it could be opened. Bobo came in via the bottom door just as Thraa threw the box down the hatch. It was undamaged by the fall and Bobo was intrigued. But hearing shouts for medical help from outside he reluctantly came out and revived Monarch.