Tinus came round and joined Bobo, Rashi and the dripping wet Igorok. Varis lay unconscious but breathing at their feet. They were still deciding what to do when they heard the sound of fast marching boots coming at them from both directions. Soldiers appeared led by Captain Alstine Dalker. She greeted them with a smile. “Looks like you’ve done my job for me again” she said. Bobo and Tinus started to explain but both explanations seemed garbled, so Igorok also added a third version and soon the captain was very confused. But the one thing she understood was that there was a duck involved. She turned to her second in command and said, “Lieutenant Borhill, search for that duck, it err emm seems important. Somehow.” The lieutenant took some soldiers to search the banks of the millrace for a duck, their hearts weren’t really in it though and they found no duck. Meanwhile Igorok shifted his cloak further over a lump of wood he was concealing.

“Well we better report all this”, said Captain Dalker, “Come on, let’s go to the main gatehouse and you can get a meal and a bed”. At that moment Issac arrived smelling of the horse dung he had been shoveling for the last few days. “You too”, said the captain, “but you gotta take a bath”. The barbarian seemed unimpressed with this idea, but he agreed to come along nonetheless.

“Captain!” said Sergeant Skinner, “there’s a blood trail here, leading toward the town”. But the captain was still trying to figure out what had happened and the group of heroes made light of the blood.

So they all went to the northern gatehouse where they were fed and then given beds in a common area. There was a halfling there who had just arrived in town. “Hi”, she said, “I’m Lil” and with that she was in the gang. The next morning Issac had a bath under protest and they all had breakfast trying to decide what to do. They all had different ideas, so they decided to go their separate ways and meet at Chenette’s perfumery for lunch.

Igorok decided he would go to The Dead Man’s Wife. He had a plan. Lil went with him, to keep him out of trouble. When they got there he started conjuring fire but just as he was about to try to set fire to the place a hand reached out from the shadows. “Hello” said the woman from the Kalla. “Up to something are you?” “Err, no” said Igorok. “Got our money then?” “Err, no” said Igorok. “Hmm” said the Kalla contact, “well we have some information you might find useful. It seems that no one except the person with the horse’s head and the duck left the theater last night during the performance. So either they have our money or you have our money or it’s still in The Globe. Now get out of here!”

Issac went fishing and Rashi found a handy barrel to hide in.

Bobo and Tinus headed to the bridge and followed the trail of blood to a mill a little way up the millrace. Santon’s Mill was written over the heavily barred door. Looking in one window they saw a normal looking mill with a grinding stone and sacks of gain and flour but there was an internal door to a room on the other side. The windows on that side had their shutters closed, except for the last one which was out over the river. Unperturbed Bobo climbed out tied to a rope that Tinus held. He peered in the window. Inside he saw a large table with a Blood Moon orc sitting at it. There were six figures in red hooded cloaks drawing symbols in flour on the ground. At the top of the room was a makeshift altar behind which stood a figure in more elaborate robes. Tied up on the altar was a young townswoman. She did not look happy. 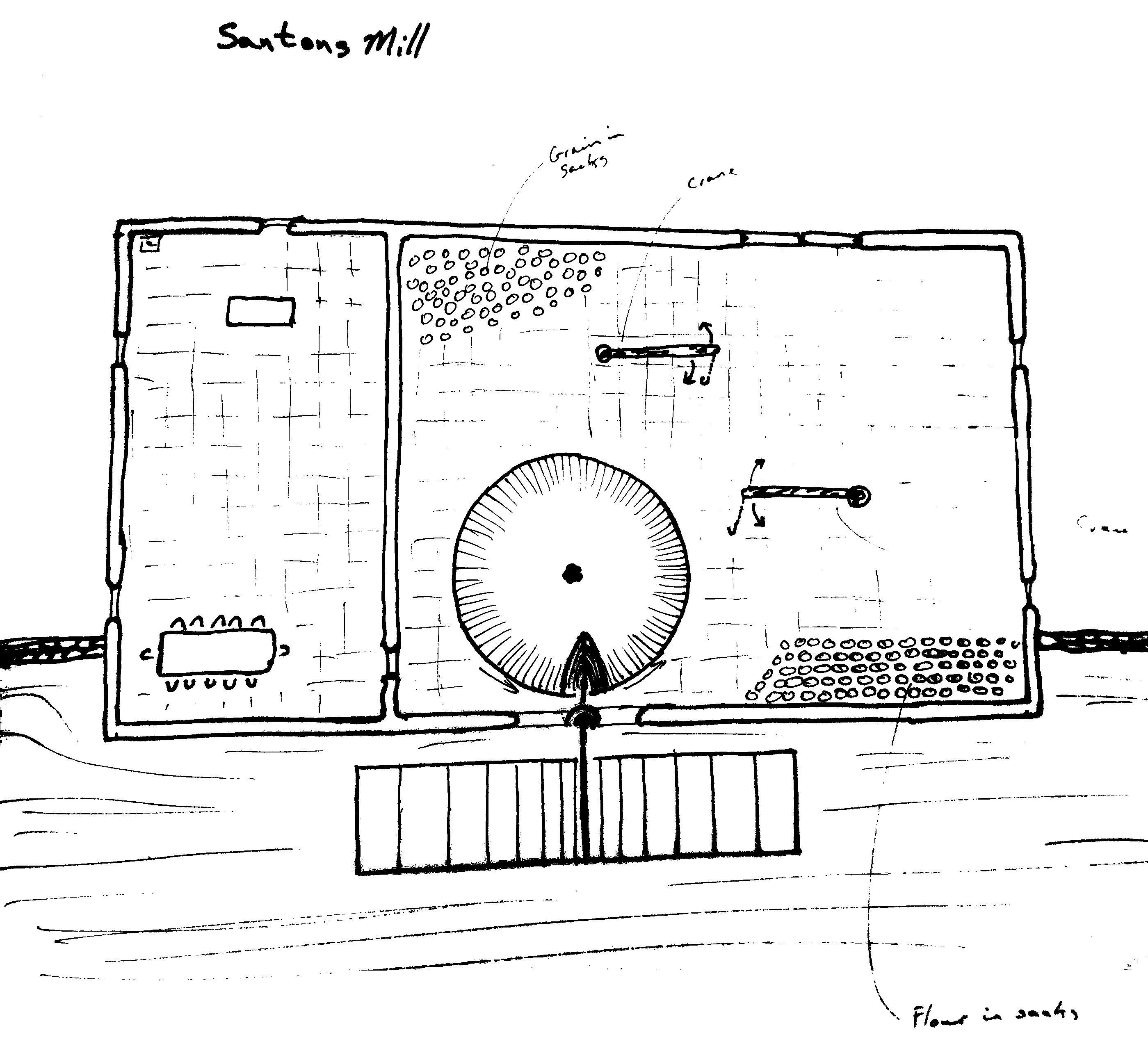 Bobo and Tinus left and went to Chenette’s to find the others, interrupting their lunch with the news. Our heroes headed back to the mill and approached the door where they had a long conversation about making a plan without actually coming up with one. In the end Rashi started to climb the outside of the building while Varis turned into a rat and ran in under the ddor. It was barred with a plank on the inside. Then Bobo used his thieves’ tools to open the latch on the window near the door and he swung in, followed with varying degrees of stealth and acrobatics by Varis, Igorok, Issac, Tinus and Lil. There was a lot of noise inside the mill from the splashing of the mill-wheel and the grinding of the mill stones. Nevertheless the group managed to make even more noise and startled a previously unnoticed orc asleep amidst the sacks of flour. He jumped up and started to run for the inner door. They all let loose on him and he fell onto the grindstone. They watch as his body went around in a circle and got mashed up by the gears, only to go round again to get more mashed up.

Rashi came into the building and climbed into the rafters joining Bobo who was already there. Bobo crept down the length of the building and peeked through a ventilation shutter into the inner room. There were more evil symbols inscribed on the floor now and the red cloaked cultists were setting up candles while the one in the impressive robes was sharpening an elaborate dagger. The woman on the altar continued to struggle.

The heroes approached the door. What was the plan again? Then Igorok knocked on the door. Bobo fell out of the rafters in surprise but was caught by Tinus. Varis shook his little rat head in disbelief and turned back into himself and created magic goodberries which he knew would soon be needed. Everyone headed for the door as quickly as they could. All except Rashi who climbed down a rope which obligingly tied knots in itself to make the climb easier. She took a hook from the end of one of the cranes in the mill and then climbed back up the obliging rope which she then ignored.

The door opened. Igorok said something about a food delivery and then the air was suddenly full of arrows, spells and screams. The cultist who answered the door died quickly and Igorok the unarmoured wizard ran boldly into hand to hand combat. The others followed mostly by the door, although Issac was trying to make his own second door. They got into the room just in time to see the wizard fall to the ground under the slashing of many scimitars. Lil ran in and killed one then surged forward toward a second who she totally missed. Varis healed Igorok with a sigh. Bobo fired arrows from the doorway. A flaming sword appeared in the door slashing at Bobo in fury. Tinus slid onto the table holding her hands out towards the cultists. Flames erupted from her hands burning three of them to death.

Igorok stood up and ran around the remaining cultist to get to the head cultist behind the altar. The others polished off the last cultist while Tinus fired three magically glowing arrows into the head guy. He staggered back and held out his hand. Igorok froze where he was. The head cultist turned and opened the shuttered window behind him. He was trying to escape. Varis put the goodberries in Igorok’s mouth and moved his chin up and down. Somehow the wizard swallowed the healing fruits. Issac stepped in and hammered a javelin through the evil cult leader pinning the body to the window.

Suddenly it was silent in the room, the only sound was the orc outside on the grindstone getting flatter and flatter.

Varis headed for a chest he spotted in the corner. Igorok searched the body of the head cultist. Tinus searched the other cultists. Bobo released the woman. Her name was Jattie Grembe, the same surname as Lady Altea. In fact her father is Lady Altea’s cousin. She knew all the cultists, the main one was Osca Santon whose mill this was. The others were townspeople she had know all her life. The women were Eula Englid, Paustacia Fir, Olidna Rolate and Britricia Miner; the men were Vinuel Edgcoville and Cucy Weaver. Jattie didn’t understand what was happening and just wanted to go home.

Igorok found some gold, an ornate dagger and a small key on Osca’s body. He handed the key to Varis who had just discovered that the chest was locked. The key fitted and turned and he lifted the lid. A dart flew out, the fletched feathers tickling his cheek as the missile just missed him and embedded in the ceiling. Varis looked up as a drop of vile poison fell from the dart. Then turning back he found a small velvet bag. He opened it and reached inside. The bag was much bigger on the inside! It was clearly a Bag of Holding. Inside he discovered 375 silver pieces and 110 gold. Also there were two small bottles with liquid in them. Tinus found different small sums of gold on the cultists.

Varis cast a spell which lit all magic items in his sight. The dagger was clearly magical as was the bag and the liquid in the bottles, but when he went out into the main mill area he noticed that the curious rope was also magical. Putting his hand on it he mentally asked it to untie itself and it did, then it coiled up and attached itself to his backpack.

On the table they found a note. It read:

Taking the tatooed orc’s arm out once more they deciphered it to be:

Kill those singers and their friends, and you will please Gruumsh.
Harld One-Eye

They knew that Gruumsh was a god that the orcs believed in and they guess that Harld was a leader of the orcs. Obviously the heroes were now getting famous enough to have come to the attentions of the leaders of the Blood Moon Orcs.

The group decided to get rid of the bodies and threw them in the millrace. Then Bobo took Jattie home and asked her to ask Lady Altea for a reward for them. Shortly afterwards everyone was at the Cheham Butcher’s , the blacksmith’s. The cultists’ scimitars were sold for cash, a hand-cross bow was purchased amongst other things. Then Igorok sold the magic dagger. He asked for 30, Cheham offered 25 and they settled on 27 gold pieces. Later Rashi asked how much it was on sale for and the dwarf replied 200.

Next Session is Saturday 13th April

Not mentioning the duck to Captain Dalker at all, not once. 100XP
Getting the group back together nicely, including bath. 100XP
Further negotiations with the Kalla. 200XP
Scouting the Mill. 300XP
Breaking into the Mill. 200XP
Killing a lone orc. 100XP
Tackling the cultists. 6 x 25XP = 150XP
Killing the head cultist. 450XP
Rescuing Jattie from sacrifice. 200XP
Decoding the note. 100XP
Finding the treasure. 100XP
Commercial dealings at the blacksmith. 100XP

So congratulations to Robin, Elliott, Noah, Carl and Tess;
Rashi, Varis, Igorok, Bobo and Tinus have leveled up to level 3.

I think some of you were interested in how quickly you will level up. I usually go with one adventure at level one, two at level two and so on up to level five. From level five on I try to level people up every five adventures. So the amount of XP you get per adventure is based on this. But it varies depending on how successful you are in an adventure. The idea is that you get used to your character’s abilities before you move up a level. If you can’t make it, you don’t get the XP.