These adventures take place in the Parchen region of the world, starting in the year 853. Parchen is a massive city trading via the mighty Mezza river with many regions inland as well as trading with many distant places across the Erdel Sea. The Merchant Princes and Princesses of Parchen exert great control over the region through financial power. They get others to do their dirty work for them. 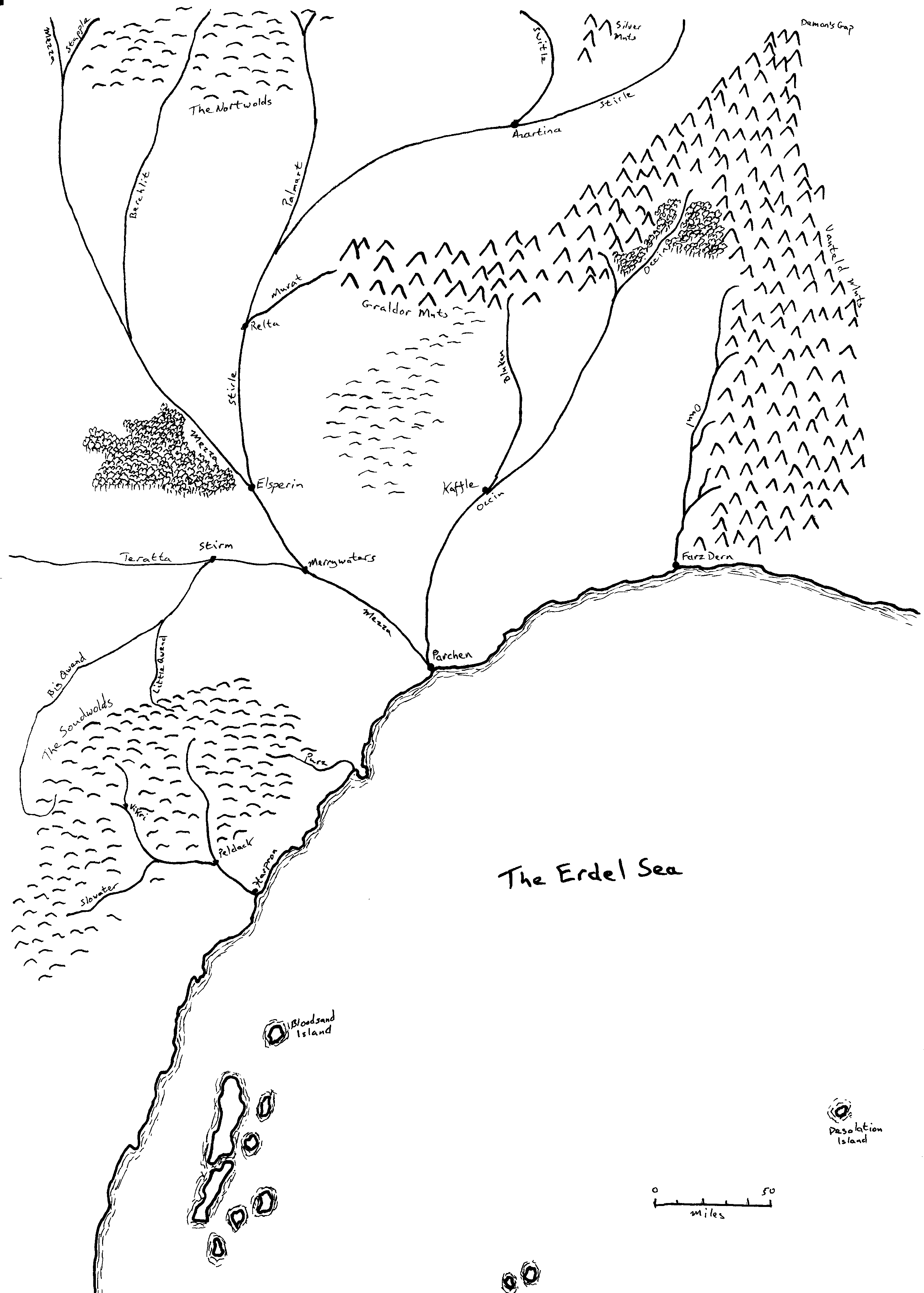 The fortress city of Ferz Dern was constructed by them to guard the coastal route to the lands of the Saka barbarians who live to the east of the Vanteld Mountains. The Ouul Valley was similarly fortified with further Derns and so the region stabilized and opened up for settlement. 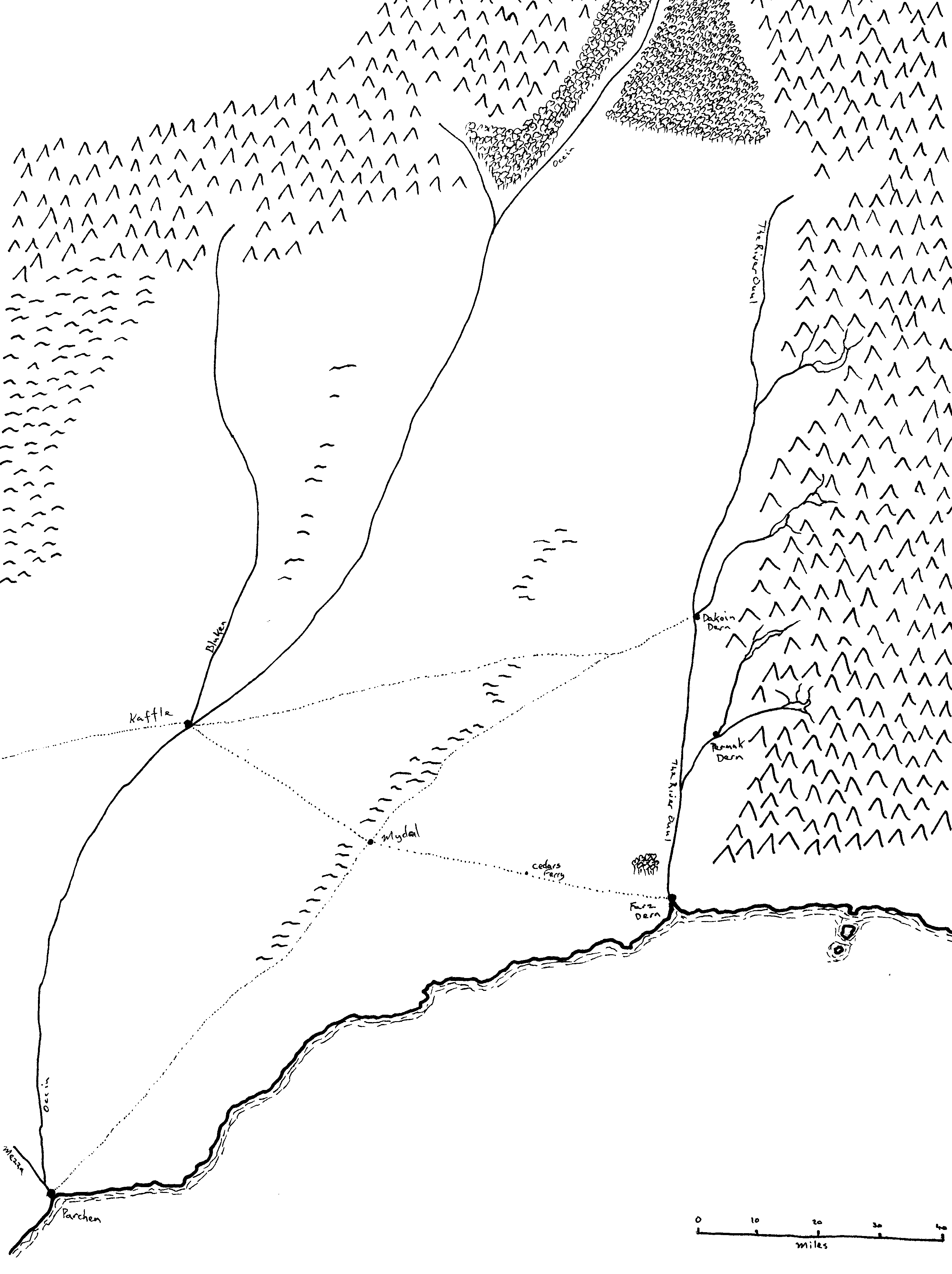 Seven friends set off on the road from Farz Dern toward Kaffle in search of employment or adventure. They are a half-elf rogue named Rashi, a hill dwarf fighter named Yartalla, a druid called Varis, an elven wizard named Ignorok, a human bard named Chenette, a half-orc barbarian called Issac and half-elf sorcerer called Tinus. After days of traveling they arrived in the small town of Cedar’s Ferry only to be told that the bridge over the river Wrall has been destroyed and so the road ahead is closed. There is a diversion available, by traveling a little north to the town of Red Mills and they carry on in that direction. 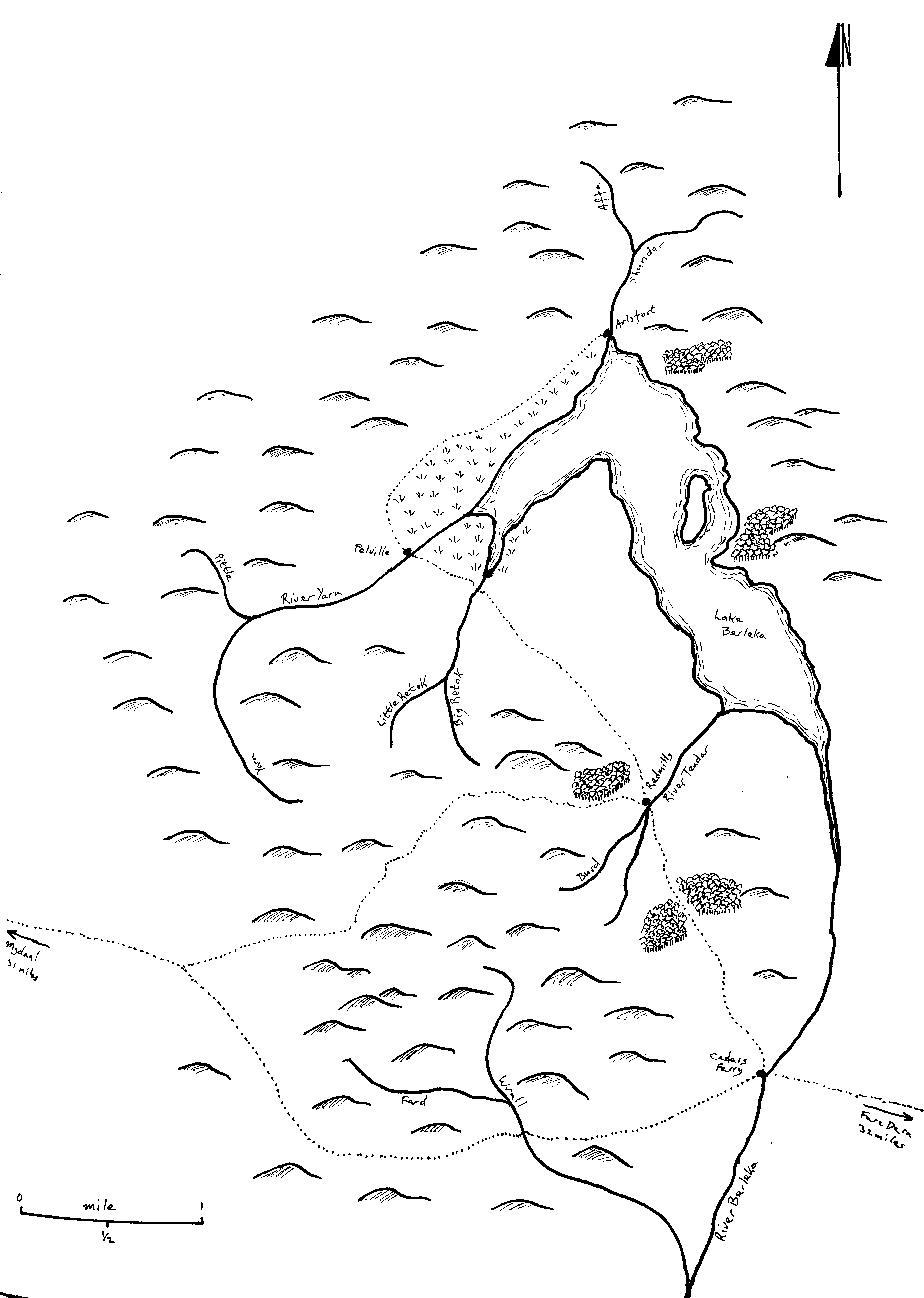 After traveling a mile up the road the group started to hear noises of a disturbance ahead of them on the road. They ventured forward, with Yartalla and Issac taking the lead, followed by all the others. Around a bend in the road they saw two wagons being beset by a bunch of orcs. The orcs appeared to be trying to hi-jack the wagons. Issac caught their attention by throwing a javelin at them and an all out battle ensued. Yartalla swung her greataxe while Chenette flung painful insults. Tinus fired magically glowing missiles at them while Rashi shot arrows from the edge of the surrounding forest. Varis shot fire bolts while Igorok created an illusion of another person to distract the orc and then shot magic arrows out of its eye. The four orcs died one after the other until Issac finally cut down the last of them. Rashi climbed a tree to keep watch and briefly saw some more orcs beating a hasty retreat through the woods. 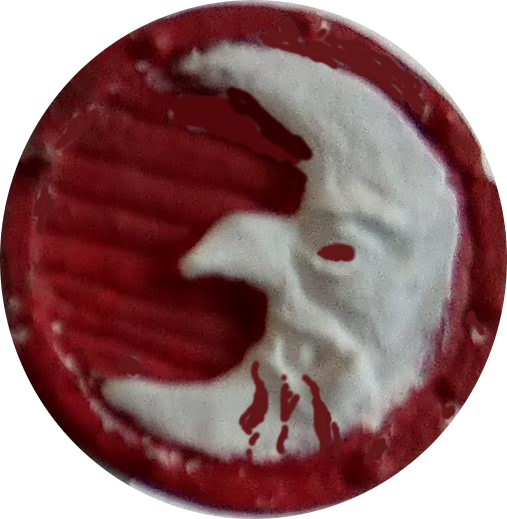 Examining the bodies they found that they all had shields showing a moon with blood dripping from it. They found a few pieces of gold on each of them, but the gold was tainted with red. The group gathered up the orcs’ shields and swords and at this point they noticed that one of the bodies had some tattoos.
One said “Bolar luvs Sheltok”
The other was a badly written version of the alphabet:
A B C D E F G H I J K L M
Z Y X W V U T S R Q P O N
Then everyone started talking to the drivers of the wagons. They were calmly wrapping bandages on their wounds. They introduced themselves as Lamba and Shufril Bonesnapper, half-orc sisters on their way to Red Mills when they were attacked by these Blood Moon orcs. Peeking in the wagons Chenette discovered that they were carrying sacks of flour and rather tasteless dry biscuits, nothing interesting, nothing worth stealing, unless you’re hungry. 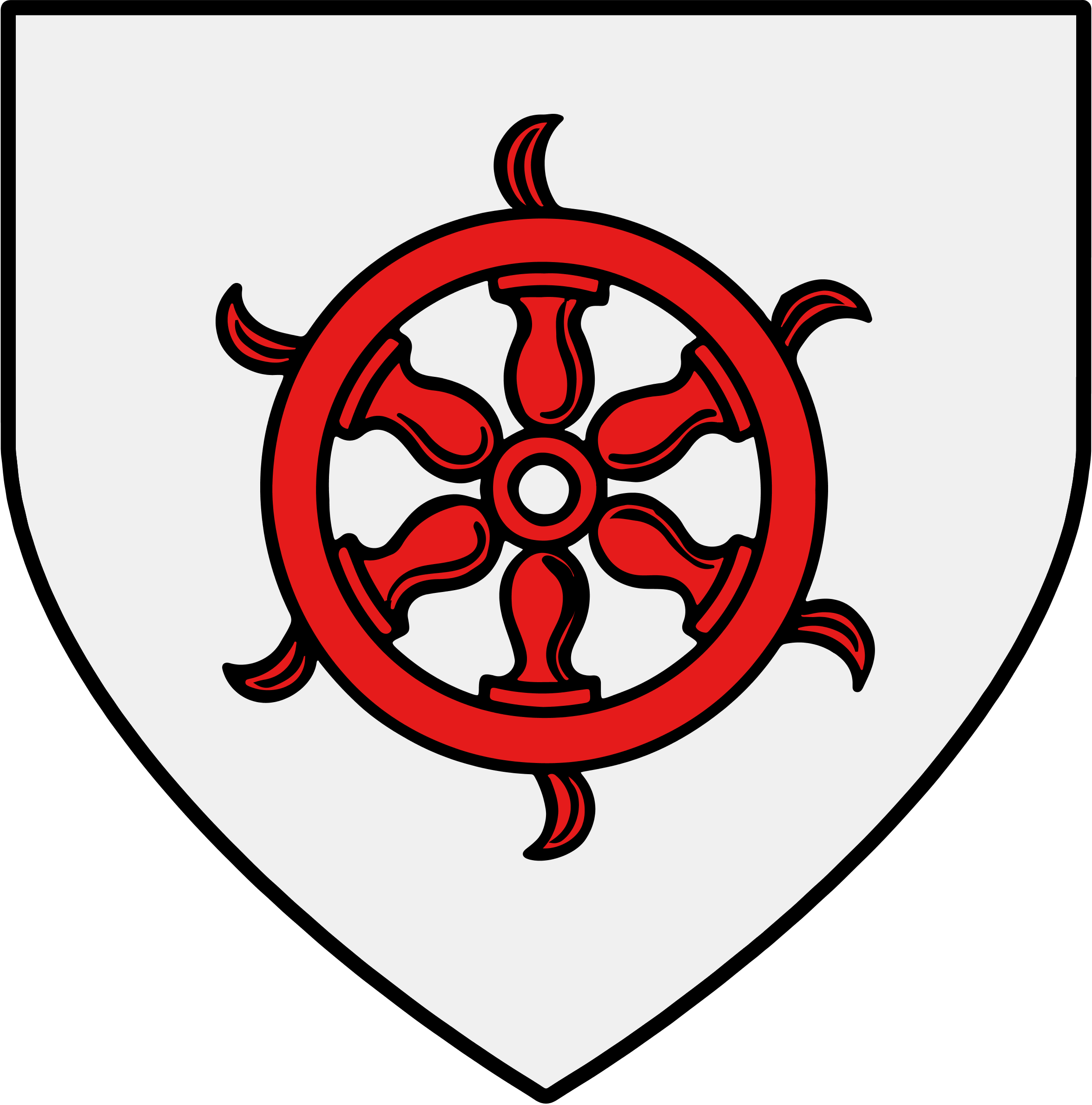 Just then a horn sounded along the road and around the corner came a mounted patrol of soldiers. Their shields were white with a red water wheel in the middle; they were clearly from Red Mills. They were led by Captain Alstine Dalker and she was delighted with the group. Calling them heroes for saving the traders and telling them that once they get back to Red Mills Lady Gremlbe would almost certainly reward them for their bravery.
The group then piled into the two wagons and were just starting to munch some biscuits when some of them spotted a folded piece of paper on the road. Someone must have dropped it in the fight.
Rashi got to it first and it read: DVHG TZGV DSVM GSV NLLM HVGH, she could make no sense of this and it didn’t appear to be in any language anyone understood. However Varis was intrigued and took the note started to ponder its meaning.
After this brief diversion, the whole company of two wagons with the Bonesnapper sisters driving, the adventurers piled inside except for Rashi who rode on top to keep watch as well as the heavily armoured mounted patrol all headed along the road toward Red Mills. Finally they rounded a corner between some low smooth hills and saw the town in from of them. The bugler sounded three blasts of the horn and this was answered from the town’s first gatehouse. 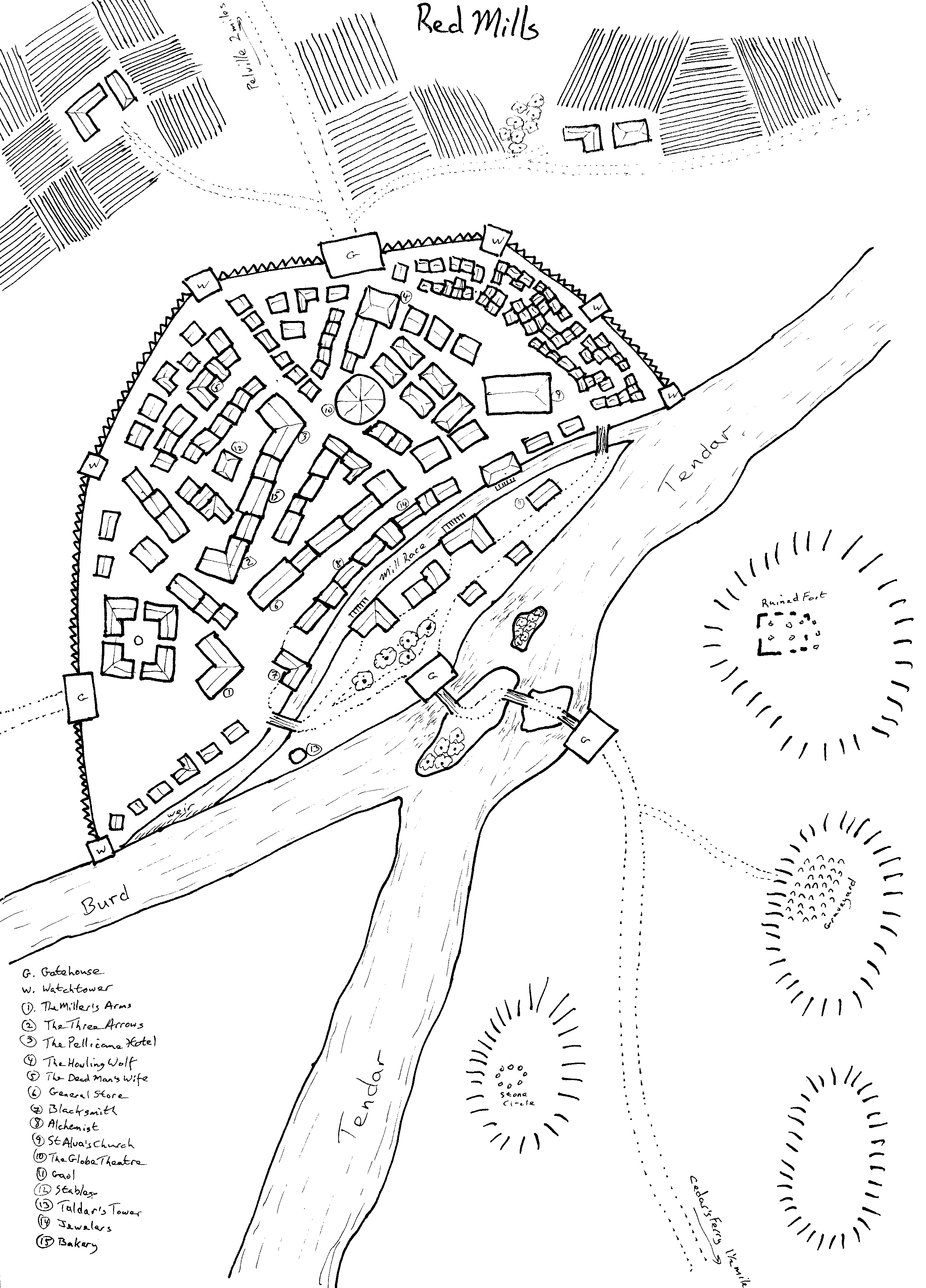 The southern entrance to the town is across a series of bridges and through two fortified gatehouses. There was a queue of wagons waiting to be inspected at the inner gate, but an important looking woman strode forward and waved the patrol and the rescued wagons in. Then in the inner courtyard she introduced herself as Lady Altea Gremlbe. On hearing Captain Dalker’s report she heaped well deserved praise on the group and gave them each 10 gold pieces as reward. Shiny yellow gold.
Then Varis took the others aside and show them the note again, he also showed them the orc’s tattooed arm (ugh). If you swap each letter in the note for the letter above or below it on the tattoo, then it reads: WEST GATE WHEN THE MOON SETS. They agreed that he should show this to Lady Gremlbe, who was both amazed at his cleverness and alarmed that an attack was planned. She immediately ordered that the guard be doubled everywhere tonight and tripled at the West Gate.
The heroes wandered into town and word of their deeds went before them. They sold orc shields to the blacksmith, a dwarf named Cheham Butcher. They got rooms at the large inn, The Miller’s Arms. Issac got a job cleaning the stalls in the stables. Rashi slept in the straw nearby. Varis meditated in his room.

The moon rose in the late afternoon, a waxing gibbous moon, 4 days from full. It would set sometime after midnight but before dawn. In the late hours of the night when everyone would be asleep. The perfect time for an attack.
Chenette and Tinus played music in the main room of The Miller’s Arms and they put on such a performance that the owner to The Globe Theatre booked them for the following evening. They haggled their way up to 20 gold pieces each. Red Mills was the group’s kind of town!
Ignorok decided that he wanted to do a little gambling and was recommended that he go to a seedy inn called The Dead Man’s Wife. The whole group headed over and seedy was a kind description of this run down establishment with rough clientele. Issac played darts, sometimes even hitting the target. Rashi wandered through the crowd and dipped her hand into someone’s pocket. Someone else that she hadn’t noticed gently grabbed her wrist and advised that such behaviour could get you killed in here. Then Ignorok raised the stakes at cards and easily beat his opponents Aces and Eight with a Royal Flush. The crowd were shocked and just about to applaud when an observer leaned over, muttered a few arcane words and touched Ignorok’s cards. The illusion he had cast on them fell away and the crowd gasped again at his 2 of clubs, 6 of hearts, 7 of diamond and 3 and 9 of spades. The bouncers immediately grabbed the cheat and were about to give him a good hiding but he charmed them with his bad reputation and they let him off with a warning.
The group reconvened at a nearby table. All eight of them. Suddenly they realised there was a stranger among them. “I represent a certain group of concerned citizens.”, she said, “Some call us the Kalla. We keep a close eye on what comes in and out of Red Mills, especially anything that might be valuable. We noticed that the wagons that you rescued were full of flour and biscuits. Can you guess what the two main exports from Red Mills are? That’s right, flour and biscuits. Now why would someone want to import them to Red Mills. We’d like to understand this riddle.”
“Oh!”, gasped Tinus, “They got through the gates without being searched! Because we rescued them and the patrol brought us all straight in!”
“Interesting” said the stranger, “I wonder what’s in them. We could check but our members are a little shy of all the extra guards around.”
“We’d check” replied most of the group, “but we don’t know where they are now.”
“The Kalla knows”, said the stranger, “They are in a warehouse behind the theatre.” and she drew a rough map on the wet table with her finger. The group studied it and when they turned back to her, she was gone.
They set out for the warehouse and while most of the group gathered at the back door, Rashi and Tinus took to the roof and spied in through shutters from up there. Varis picked the lock and they all crept in. The two wagons were down the other end near the main doors, the horses were gone and all appear quiet. Suddenly, Lamba, one of the half-orc drivers started shooting them with bolts of magic. The group leapt into action and soon overcame her, she was dead.
Most of the group were checking her pockets while Ignorok went to look at one of the wagons. Rashi and Tinus came down from the roof and started looking around.
Ignorok found a lever under the flour and biscuits. He pulled it.
The false bottom of the wagon sprang open and up jumped four Blood Moon orcs. Everyone was in the wrong place and the battle was going badly. Ignorok turned the tide with a flaming hands spell and things looked to be under control. But then the second wagon also sprang open and out jumped four more orcs. They downed Tinus and then Ignorok and things were looking grim. Axes, swords and comical insults from the bard Chenette flew fast and furiously through the air. Until finally the orcs were defeated. Those still standing quickly revived Ignorok and Tinus with magic while Rashi gathered up the orcs’ red gold and gave a portion of it to the others.
The heroes had foiled the orcs’ trojan horse attack on the town!

Congratulations to everyone, you are all now Level 2.

Next Session is Sat 23rd